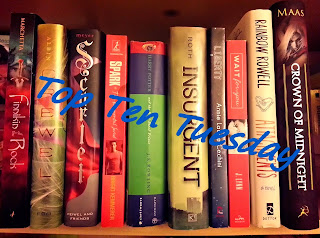 Top Ten Tuesday is a weekly meme held by The Broke and the Bookish.

This weeks topic is:

One of my reading goals for the year is to reread at least 20 books. I'm doing really well with it, but there are still a lot of books I want to try and get to this year. So here are the ones at the top of my list.

I read this one when it first came out and I absolutely loved it. So I think it's time I give it another go. I want to remember what I loved so much about it. But I'll definitely be leaving it till Christmas time.

I also read Starters when it first came out. And I really enjoyed it. With the sequel finally released(two years later...) I want to read it, but I can't remember much that happened. So I need to make time to do a reread here so I can continue on.

8. The Unbecoming of Mara Dyer

Another series I want to continue of with but can't. I read this one right around the time it was released almost three years ago. Than when the second book was released a year later I could not remember anything. Nothing. So I was going to do a reread but I never got around to it. And with the third book being pushed back a few times I decided to wait until there was a solid release date. It looks like it will finally be released this fall, so time to get my reread on.

I just feel a need to. It's one of my favourite books/series and it's been far to long since I first read it.

6. The Sea of Tranquility

I only read this one less than a year ago. But I just loved it so so much. It's another one I just need to reread ASAP.

5. Anna and the French Kiss & Lola and the Boy Next Door

With the much anticipated release of Isla and the Happily Ever After finally getting closer. It's only fitting that I pick up these two lovelies and get my cute on.

4. Lord of the Rings

I've read The Lord of the Rings quite a few times. But it has been years since I last picked it up. I'm in a LOTR mood, so it's time to get back into Middle Earth. I'll probably do my reread by audio this time.

I don't read a lot of non-fiction but this one just spoke to me. And now that I'm actually the age of the girls I think it will resonate ever more so with me. And I absolutely loved the book.

One of my favourite trilogies easily. And I was really getting the itch to give it a reread. Than last year Snyder said she was going to continue on with the series with three more books to come. I was shocked but sooooo excited. So now knowing there's more to come of Yelena and Valek I am even more desperate to pick up these guys up again.

Another one of my favourite books/series. It has been far to long since I first read it(probably six years). Actually far to long since I've last read a book in the series. But that's soon to change with the hugely anticipated release of the eighth book in the series releasing next month. Outlander was first released twenty-two years ago. It's taken that long to get to the eighth book and there's still one more to come. The wait for that one might kill me. But I'm also dreading it.


Any books you want to reread soontime? Don't forget to link up your TTT below.