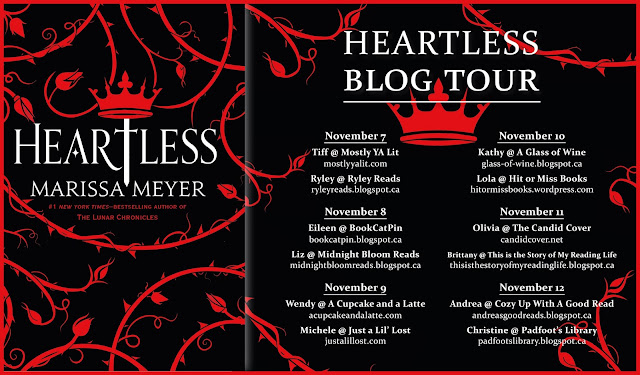 G'day friends! Welcome to my stop of the Heartless blog tour. Are you guys excited for Heartless? Was it one of your 2016 most anticipated? Have you already read it? I know it's one of those things if not all three. Right? I mean it's Marissa Meyer, anything that lady writes is going to be gold and find its way into my hands immediately. Anyhow, I'd like to thank Raincoast Books for having me participate. And for giving me the chance to introduce you guys to a special character you'll meet in Heartless. Keep reading for an excerpt and my review.

I live in Tacoma, Washington, with my husband and beautiful twin daughters. Published works: The Lunar Chronicles; Cinder, Scarlet, Cress, Winter, Fairest and Stars Above) and Heartless.

Hatta(The Mad Hatter), the bizarre. Seriously, Meyer captures what I love about The Mad Hatter in all his head scratching glory. Hatta and his magical hats and his entertaining tea parties are some of my favourite parts of Heartless. That being said, Hatta has his dark side. The mystery behind him is something I wouldn't mind Meyer exploring in the future(hint, hint). Hatta has his angry and cunning side as he continues to try and outrun time and his ultimate descent into madness. It's all so much fun!

With one hand on her elbow, Jest guided Catherine around the table, toward the man who was occupying the throne at the far end. He was exquisitely dressed, with plum coattails and a crimson silk cravat. One finger skimmed idly along the brim of a matching purple top hat. Though he was young, his hair was silver-white, with a few choppy locks tumbling around his ears and the rest tied with a velvet ribbon at the nape of his neck.

He was slouched and apparently bored, feet set up beside a half-empty cup of tea.

Then his attention landed on Jest and turned lively, a grin fast to brighten his face. He swung his feet off the table.

“Well, well, if it isn’t our star performer, returned from the world of gallantry and riches.” He stood and gave Jest a quick embrace, before pulling away and grasping him by the shoulders. His smile had turned to scrutiny.

“Don’t seem much changed,” he mused, shutting one eye at a time to complete his inspection. “A bit scrawnier perhaps. Don’t they feed you in that fancy castle of yours?” He pinched Jest’s cheek, but was pushed away.

“Like a cow for slaughter,” Jest said, “but I’m also forced to work for my pay. A novel idea to you, I know.”

“A horrific waste of talent is what I call that.” The Hatter—for Cath assumed this must be him—grimaced suddenly and cast his gaze toward the Hare and Squirrel on the table. “That’s enough! I can’t take any more.” Grabbing a cane that had been propped against his chair, he whapped the handle of a spoon, which flicked a cashew from a bowl of nuts and sent it soaring right into the Hare’s open mouth.

The Hare froze. A sudden silence fell over the tea parlor. The Hare pounded on his sternum—choking. His red eyes bugged. Catherine tensed.

The Boa Constrictor slithered onto the table, encircled the Hare’s body, and squeezed. The cashew sailed out of his mouth and kersplatted into the Turtle’s teacup.

Catherine watched, appalled, but the rest of the tea party guests had already taken back up with their conversations and tea drinking. She seemed to have been the only one concerned.

Long before she was the terror of Wonderland—the infamous Queen of Hearts—she was just a girl who wanted to fall in love.

Catherine may be one of the most desired girls in Wonderland, and a favorite of the unmarried King of Hearts, but her interests lie elsewhere. A talented baker, all she wants is to open a shop with her best friend. But according to her mother, such a goal is unthinkable for the young woman who could be the next queen.

Then Cath meets Jest, the handsome and mysterious court joker. For the first time, she feels the pull of true attraction. At the risk of offending the king and infuriating her parents, she and Jest enter into an intense, secret courtship. Cath is determined to define her own destiny and fall in love on her terms. But in a land thriving with magic, madness, and monsters, fate has other plans.

In her first stand-alone teen novel, the New York Times-bestselling author dazzles us with a prequel to Alice's Adventures in Wonderland.

The queen of re-tellings takes on a different world in Heartless. It's no secret that Wonderland, particularly starring Alice, are quite a popular commodity in the book world. I'm sure it has something to do with the bizarre world and characters that Carroll created. There's a lot to explore there. What I was really anticipating with Heartless, though, is Meyer's take on The Red Queen before she became the evil "off with their heads" tyrant. With no back story provided by Carroll, Meyer had the world at her fingers(and her imagination too) to provide readers with an interesting prequel.

Catherine/Cath lives in Hearts. It is a sleepy kingdom that thrives on gossip, parties, and characters of all sorts. As a Lady, Cath has expectations attached to her life and name. She's a noble lady, therefore she must act and live like one. Her love of baking and the dream of opening a bakery with her maid and best friend Mary Ann is farfetched but that doesn't stop Cath from dreaming of the impossible. Things starting going sideways when Cath realizes the King has taken an interest in her, a romantic interest. In fact, he plans to make her his Queen. Cath wants nothing to do with that life. She just wants to bake her days away. Then Jest shows up; the new court joker is mysterious and appealing. There seems to be an intense spark between Cath and Jest, one that Cath eventually falls into. Jest leaves Cath even more determined to control her own destiny and have the love and husband she chooses. Of course, that's not how the story goes.

We all know how this story ends before we even open the book. We know that Cath doesn't have a happy ending in store(well that could be argued but I digress, this is not a happy ending). Now we just have to know she got to that place of evil Queen. Cath starts out as a dreamy, intelligent and proper lady. She does what's expected of her, is nice to all the caddy people of the kingdom. Well, she plans her future in private. I love me a villain starter story. It's super intriguing to see their fall into wickedness. And admittedly Heartless was no different. As soon as Jest appeared it was quite obvious where Cath's story was going. But I guess I held out a teeny bit of hope that Meyer was going to change Cath's ending... As people kept trying to keep Cath away from her wants. As people kept trying to control her future. As the jobberwock wrecked havoc on Hearts, Caths decent into a less than content and starry-eyed dreamer was slow but obvious. The Red Queen was there on the horizon, love was going to change Cath in her. Nobody saw her coming(well nobody in Hearts).

Heartless is full of the characters that intrigue us, probably even love, from Carroll's Wonderland. Cheshire, The White Rabbit, Hatta and everyone at his mad tea party. Even just mentions of beloved characters were fun to realize. Hatta is as mad and bizarre as we know him to be. Cheshire is as cunning and truthful as expected. But Jest, Jest is a new one. It's hard not fall for the court joker. He's mysterious and swoony all rolled into a lovely package. My heart hurt from the moment I met him because I didn't foresee a happy ending for him.

Meyer took liberties with her version of the pre-Wonderland days. But all the charm and weirdness was in every page and every character. I could imagine this as part of Carroll's world. These characters are Meyer's yet fit in right with the magical world Carroll created. I did go in with high expectations. I mean The Lunar Chronicles is one of my absolute favourite stories. I fell in love immediately upon opening Cinder. So Heartless had big shoes to fill. At the end I thoroughly enjoyed Heartless, it is absolutely a great spin on Wonderland. There were just some bumps along the way. Cath's story was a slow one. I, unfortunately, was not dying to read every day. And that takes away a bit from my enjoyment. But those that last third was more on par with the action and adventure and intense scenes I loved from The Lunar Chronicles. So thank God for those last 150 pages(even if they were a tad bit sad).

Heartless is a fun and bizarre love story. Don't mistake it for anything else. It's about what happens when, in a world where anything can happen, your destiny is made for you. Cath's love for Jest is ultimately her downfall. Her transformation in The Queen of Hearts provides the entertainment value I love about Wonderland in all its impossible weirdness.

I want to thank Raincoast for including me in this blog tour. Very much appreciated.
Guys, make sure you check out Heartless. I know there's a Wonderland fan in all of us, so this one fits perfectly into that category. You should also check out the other tour stops so you can get to know many of the other characters Heartless introduces us too! Follow the tour on social media; #HeartlessIsHere

#CurrentlyReading Heartless by Marissa Meyer ° ° Less than a week until release!!! 🙊🙊🙊 I've been so busy this week that reading has taken a back seat. 😣 But that means I've been savouring reading Heartless instead of devouring it in a day. So I guess that's a good thing. I mean this book is amazing so far. Obviously. It also makes me drool with all of Cath's baking and the description of said baked goods. ° ° ° #shelfie #Heartless #TheLunarChronicles #Cinder #MarissaMeyer #SciFi #AliceinWonderland #FierceReads #RaincoastBooks #IreadYA #IloveYA #bookstagram #bookstagramer #bookaddict #booklove #instabook #bookphotography #bookporn #bookgram #booknerd #bookworm #booknerdigans #booklion #reading #reader #books #bibliophile #bookblogger #whatimreading
A photo posted by Brittany (@britsreadinglife) on Nov 2, 2016 at 8:38pm PDT