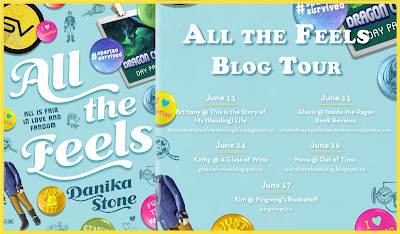 Hello friends. Today I have the lovely Danika Stone, author of All the Feels stopping by. Danika's book is about college freshman Liv, and her life being heavily involved in a fandom. Here's Danika's story on how she first became a fangirl.

Losing a Beloved Character: The Making of a Fangirl

2009 was a difficult year for me. My father had died that spring, and I was deep into my post-graduate studies. My joy for literature had disappeared. I couldn’t make myself write anything I liked, let along find the passion I’d once had for storytelling. The combination of personal and professional stresses left me desperate for distraction.

Seeing me struggling, my husband suggested we start watching Battlestar Galactica, a scifi series that had been on our ‘must-watch’ list for many years. With little expectation, we started the miniseries.

I don’t know what it was about the miniseries that captured my attention so much, but once I was hooked, there was no going back. The characters, in a post-apocalyptic battle with humanoid robots called Cylons, were real and flawed. Their struggles were so much more than mine, and I felt a kinship for them as they forced themselves to go on, day by day. Beautifully written, with all the difficult moral questions that made me think, Battlestar Galactica brought a new level of fannish interest to my world. Even now, more than seven years later, episode 33 is my all-time favorite piece of television.

My husband and I watched a season a week that summer. (And likely would have watched a season a day, except I had to do classwork as well.) BSG was the carrot for every project I completed, the reward at the end of each class. I loved the characters, the plot, the whole experience. In my own, sheltered bubble, I let myself soak it up.

I remember my complete disbelief that this character who’d come to represent everything I believed about forcing yourself to go on after the worst had happened, had died by her own hand. It was so out-of-character (in my eyes) that I couldn’t let it go. My husband wanted to watch the next episode, but I was certain that there’d been a mistake. That couldn’t have happened, right? With a fervor born out of desperation, I headed to the internet to find something to make it right.

In the end what I found was a community of fellow fans who helped me come to terms with Kara’s death. And it was through that same community of support that I found my own writing energy renewed. I wrote my first “fix-it” fic, to come to terms with her end, but quickly moved onto bigger and better AUs. Through the positive voices of those in fandom, I found my urge to return to so-called REAL writing. In essence, the positive play of fanfic had reignited my writing muse, and once back, I could write my original stories once more.

All the Feels is an homage to that experience. Liv and her loss of Captain Spartan is a struggle I know too well. I hope that her journey is one you enjoy, too!

All the Feels by Danika Stone

Publisher: Swoon Reads
Publication Date: June 7th, 2016
Pages: 336
Source: From publisher
Rating: 4/5
Add to Goodreads
College freshman Liv is more than just a fangirl: The Starveil movies are her life… So, when her favorite character, Captain Matt Spartan, is killed off at the end of the last movie, Liv Just. Can’t. Deal.

Tired of sitting in her room sobbing, Liv decides to launch an online campaign to bring her beloved hero back to life. With the help of her best friend, Xander, actor and steampunk cosplayer extraordinaire, she creates #SpartanSurvived, a campaign to ignite the fandom. But as her online life succeeds beyond her wildest dreams, Liv is forced to balance that with the pressures of school, her mother’s disapproval, and her (mostly nonexistent and entirely traumatic) romantic life. A trip to DragonCon with Xander might be exactly what she needs to figure out what she really wants.

This is the type of book that is super relatable for a lot of people. Liv is a heroic won't take that shocking and bullshit death of a character fangirl. How many of us wish our fandom could have done what Liv does? She helps start a fire that ignites and actually brings attention to the creator and stars of her beloved Starveil. Imagine if Fox had actually listened to the fans and brought back Firefly? Or if we'd had Netflix or Hulu back then to come in a rescue it. Liv and the Starveil fandom accomplish something I wish could happen in some of my fandoms too; bringing a character back from the dead.

Liv's life centers around her love of Starveil. She eats and breaths the fandom. Like many of us who live on the internet, she found an outlet and friends who are alike in their obsession. Liv has some anxiety when it comes to real life; having friends, going outside, being social, you know the ones that a lot of us geeks face. She is quiet and happy being in the shadows. That doesn't mean she isn't clever. Liv has the skills when it comes to vidding(as she so put it). Which includes graphic design, editing and mixing videos, the things that come in handy when igniting a fandom.

Besides her online friends, she has her best friend Xander. Who is a character all of himself. Steampunk cosplay is his daily life. He's pretty much a 19th century guy living in the 21st century. Xander is a fun juxtaposition. From his clothes, his love of fast food, texting, being an actor yet kind of hating on actors, and how much more sociable he is than Liv. That's what makes their friendship spot on, opposites yet they get each other through their geekiness. Through banter, a little bit of flirting and being there for each other, Liv and Xander build a solid friendship that has the spark for something more. It's one of those everyone can see and soon the friends will let that flirting sprout wings and evolve(which it does very naturally). Such a sweet romance going down.

All the Feels has its fair share of interesting characters. But all in all I was invested in Liv succeeding in her quest to bring back Spartan. I think we fangirls/boys can agree that our obsessive personalities can take the drivers seat. It's something a lot of our friends and family don't understand. Liv's character does a great job showcasing that in a relatable yet fun way. Liv's woes through real life, her mom, dating, school get drowned out when she gets online. Escape. The build up and than arrival at Dragon Con is the best part. It's not only where Liv and Xander's relationship comes to the forefront, but Liv finally feels at home. And getting to meet the Starveil creator and cast certainly helps(even when that doesn't go to plan).

All in all, All the Feels is exactly the story a fangirl/boy can relate to. It's fun and sweet in its characters and look at the power of a fandom.

Enter for a chance to win this All the Feels prize pack. 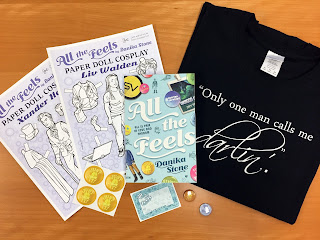 **Thanks so much to Raincoast Books and Danika Stone for allowing me to participate in this blog tour. As well as providing the giveaway prize.**
Posted by BrittanyL at 6/13/2016 09:55:00 am