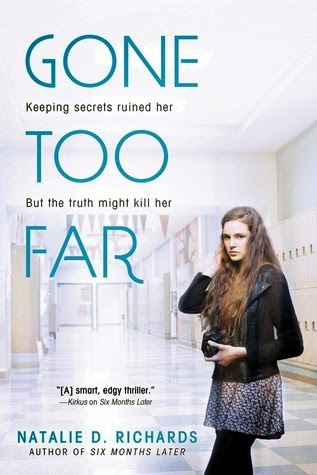 Keeping secrets ruined her life. But the truth might just kill her.

Piper Woods can't wait for the purgatory of senior year to end. She skirts the fringes of high school like a pro until the morning she finds a notebook with mutilated photographs and a list of student sins. She's sure the book is too gruesome to be true, until pretty, popular Stella dies after a sex-tape goes viral. Everyone's sure it's suicide, but Piper remembers Stella's name from the book and begins to suspect something much worse.

Drowning in secrets she doesn't want to keep, Piper's fears are confirmed when she receives an anonymous text message daring her to make things right. All she needs to do is choose a name, the name of someone who deserves to be punished...


Piper is usually found to be hidden behind her camera. Which means her classmates see her coming but they also forget she's there. She has her friends but for the most part Piper feels invisible. One morning she finds this notebook full of what appears to be the shady and secretive going on's of the kids in her school. Piper has every intention of turning the note book in and getting as far away from it, but she just can't seem to give it up. Than she's standing at her locker, which happens to be next to the most popular girl, Stella, in schools locker. When Stella starts getting bullied and called out over a sex tape, Piper thinks about stepping in but doesn't. Than the sex tape goes viral and Stella turns up dead. Hit by a train. Piper doesn't believe for a second that it was accidental. She feels like she could have prevented Stella's death. Which is absurd. But when she gets an anonymous text saying she can help get the people back responsible for Stella's death, she eventually coincides and gets herself involved in something that is way over her head.

You'd think that this sounds like a decent mystery/revenge type story. I thought so too. But unfortunately Gone Too Far fell really flat. Let's start with Piper. She's a hypocritical wet blanket. She's so torn up about what happened to Stella. Of course it's awful. Stella was bullied over a sex tape that she never gave consent for. When Piper sees the video, it's obvious that Stella had no idea she was being taped. It's terrible and tragic. Piper is completely torn up over Stella's death. Which on one hand is a little understandable, a class mate died well before her time. But Piper and Stella have never been friends. In fact their interactions have only been through a camera lens. Piper is disgusted over the way Stella was treated. She seems to hate the bully behaviour. Which we all should be against. But than Piper is pretty quick to jump into the exact behaviour that she was so against five minutes ago. She's given the chance to pick a name and the anonymous texter will essentially take that person down. So Piper is doing the exact same thing that the kids did to Stella. I can't get on board with that. Sure, I like myself a revenge story. But I didn't see Piper as getting revenge. I saw her getting caught up in a situation she never should have stepped into. Piper is told where to show up with her camera and take pictures of the "destruction". She does and she enjoys it.

Piper has absolutely no personality. She's meak and is easy to harp on her friends when they're not living up to expectations. Piper is quick to say her best friend is an asshole, and only she gets him. What? That's the first impression you want to give us of your best friend? Seriously.
The "popular" guy Nick starts to take an interest in Piper. She's immediately dismissive of him and a little rude. I really don't understand Nick's interest in her. But he's that misunderstood popular football player, who really has a lot if different and artsy interests. Typical YA romance.
I wasn't all that impressed with any of the characters, but even Piper's friends had more personality than her. I got that from the limited interactions we saw. Obviously I was not a fan of Piper's.

Truthfully, I did a lot of skimming. I could skip pages at a time and not miss a single plot element. I also felt something was off with the writing. I can't really pin point what exactly. It didn't flow well. The dialogue was all over the place. There'd be a conversation going on and it seemed like a sentence or two was missing. The writing wasn't terrible. It was pretty average. But with it lacking a good flow I wasn't drawn in.
Like I mentioned the revenge element was not my thing. I didn't see it as justified. And even the acts of revenge weren't all that special. Usually a revenge story has some pretty soul destroying consequences for the accused. In Gone Too Far only one of the kids that had something done to them took it personally. Everything was pretty tame.
Finding out who the anonymous texter was is what kept me reading until the end. I had a theory and I wanted to make sure I was right. I was. I don't think it was very hard to figure out who the texter was. All the clues were laid out for Piper and the reader.

Unfortunately Gone Too Far was a pretty sub par read for me. It took a lot not just to DNF. But I did want to find out the mystery. So that was all the kept me reading.