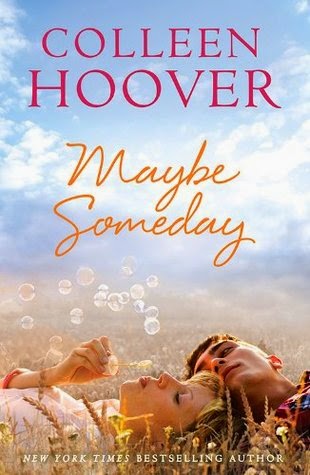 Sydney is living in an idyllic bubble - she's a dedicated student with a steady job on the side. She lives with her best friend, has a great boyfriend, and the music coming from the balcony opposite hers is fast becoming the soundtrack to her life. But when Sydney finds out her boyfriend is cheating on her, the bubble bursts. The mysterious and attractive man behind the music, Ridge, gives Sydney hope that she can move on and they begin to write songs together. But moving on is harder than she expects, Sydney can only hope…. Maybe someday… Colleen Hoover draws you in to this passionate tale of music, love and betrayal…
Contains exclusive content: Songs from Griffin Peterson

This was just such a unique reading experience. I'm a massive fan of Hoover. So of course I was beyond excited for her new book. Than I find out that the book comes with exclusive songs written for specific scenes in the book. And guys, it is imperative that you listen to the songs as you're reading the lyrics. Not only are the songs beautiful, but it just makes your reading experience more emotional and kind of personal. I literally felt like I was sitting on the bed with Ridge and Sydney as they wrote and performed the song. And that last song(I don't want to spoil anything), guys, my heart. If my robot heart feels the feels than you know the author did their job.

There is a lot more to Maybe Someday than the book blurb gives you. I obviously can't really go into specifics without spoiling the story. But it's not just about a heartbroken girl who's just trying to find herself.
Sydney thinks she's living the ideal life, finishing off her schooling in musical education and in love with her boyfriend of two years. She spends every night out on her balcony listening to the guy across from her play some of the most beautiful music. She's obsessed. She even starts to make up her own lyrics to the songs.
Ridge, the guy playing the music, he's having a nasty case of writer's block. He's been noticing the girl across the way every night coming out to listen to him, but than he also starts to notice she's singing along. He wants to know the lyrics she's come up with. So they start texting, she sends him the lyrics(after a bit of convincing on Ridge's part). He's absolutely thrown by how fantastic the lyrics are and wants to use them for this song for his band. So they decide to meet up at what she thinks is going to be her surprise birthday party. But Ridge has been noticing some sketchy stuff going on between Sydney's roomie and boyfriend. And he doesn't know if he should tell her that her boyfriend is cheating on her or not. They obviously don't know each other, so how do you start a conversation like that? But he does the right thing and tells Sydney. And this is where her world falls apart. With nowhere to go Ridge offers her a place to stay(with him). This is where the story really takes off. You learn something about Ridge and my emotions take over.

I found Maybe Someday a little more profound than Hoover's other books. She explores the dynamics of relationships and love in a really thought provoking way. Sydney's just had her heart broken and she's wondering how she can ever trust anybody(she just lost her boyfriend and best friend) again. Than Ridge enters her life and they connect on a whole new level. The music brings them together at first. They spend a lot of time together writing and composing songs. It's a very intimate experience. So of course attraction starts to grow. But you see Ridge has a serious girlfriend. She doesn't live close by, so she's not in the picture a lot to begin with. And this is where I think Hoover did a fantastic job and made this story more than just about cheating and betrayal. She made it about how something so innocent as love can take on a million different meanings in totally different situations and relationships. And about all the different dynamics of a relationship. How you can love different people so differently. Or how loving two people can still feel so right. Of course in the end there is ultimately that one person that is a better match for you. But it doesn't mean you can't love both of them.

Hoover even explores the possibility of soul mates. Everyone has their own opinion on the topic. But what if you were with who you thought you were meant to be with and than you meet somebody else that just totally throws what you thought was right out the window. Ridge and Sydney's connection is instant. They may never really act on it because obviously Ridge is in relationship. But the emotions and feelings definitely escalate as the weeks go on.  The thing is that they could be themselves around each other. Their true selves. Ridge told Sydney things he's never told anyone before. It was obvious that Sydney was putting on a bit of different persona with her ex-boyfriend. She was being who she thought she should be to him. And the same was for Ridge. You could tell as the story went on that yes he obviously loves Maggie(his girlfriend) a lot, but he was also acting a certain way. A way he thought she needed him to act. Eventually all the acting is going to take its toll, whether on the person, the relationship or both.

As characters, I loved both Ridge and Sydney. They were both strong and selfless people in different ways. I also love how committed Ridge was to Maggie. Ridge and Sydney were just very good people. And you were routing for them, even though it was a tricky situation.
I also loved Warren. Ridge's best friend and roommate. He was kind of the comic relief. But also this very inappropriate yet intelligent guy. I need a book for him. Please make it so, Hoover!

There's so much I still want to say about Maybe Someday, but it would be spoilers. So I think I'm going to put some more thoughts down below. So this is your warning, read at your own risk.:)

Needless to say, I loved this book. Hoover is one of my favourite authors. She never disappoints. And I'd love to discuss this book more. So if you've read it feel free to tweet me and we'll get a discussion going.


**SPOILERS. CONTINUE AT OWN RISK. SPOILERS**
*highlight text below to read spoilers**

So when we find out Ridge is deaf it was a total :O moment. And I had this thought that no, Hoover better not screw this up. I should know never to doubt her. There is no way that this book would have been anywhere as fantastic as it was if Ridge could hear. Ridge was such an independent person. And in no way did Hoover ever show his "disability" as a handicap. It was the total opposite. And I don' think this book would have hit as hard emotionally or as deeply with me if he could hear. And also just the way he sees and feels music was inspiring.

I also really loved Maggie. The shit life has thrown at her is terrible. But in no way did that slow her down. She had such a positive, live life to the fullest attitude. Such a strong and independent girl. It was obvious she took care of herself. She didn't need saving. I know Ridge just wanted to protect her from the world, but she didn't need it. She could rule the world if she wanted to.


The only little bit that I felt could have had a little more depth to it was the whole Ridge/Maggie break-up. I felt that the talk was a bit of a cop out so that the Ridge/Sydney relationship could take-off. There should have been more fight in that conversation. Not necessarily yelling, just fight on Ridge's part. He kind of just took everything Maggie said as true. And it was all true. But he cried and now on to Sydney. Don't get me wrong, I wanted Sydney and Ridge to get together(and I wish we had more of their relationship). But he was trying to be Maggie's protector for five years and after one conversation he just took it as that; Maggie didn't need him. There should have been more to their ending. Maggie was right on why they can't work and aren't good for each other. There just should have been more to say.